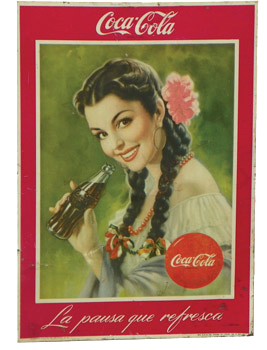 This vintage Coca-Cola “La Pausa Que Refresca is a rare, Spanish Coca-Cola sign. The sign reads, “La pausa que la refresca” at the bottom. (This slogan was part of Coca-Cola’s Spanish ad campaign in 1929, and is translated to “The break that refreshes” in English.) The rectangular sign is bordered with a thick red frame (with small white bordering that) surrounding a painting of a Spanish woman holding a glass bottle of Coca-Cola. The woman is wearing two braids tied with green, white, and red bows. She has a pink flower in her hair and is wearing